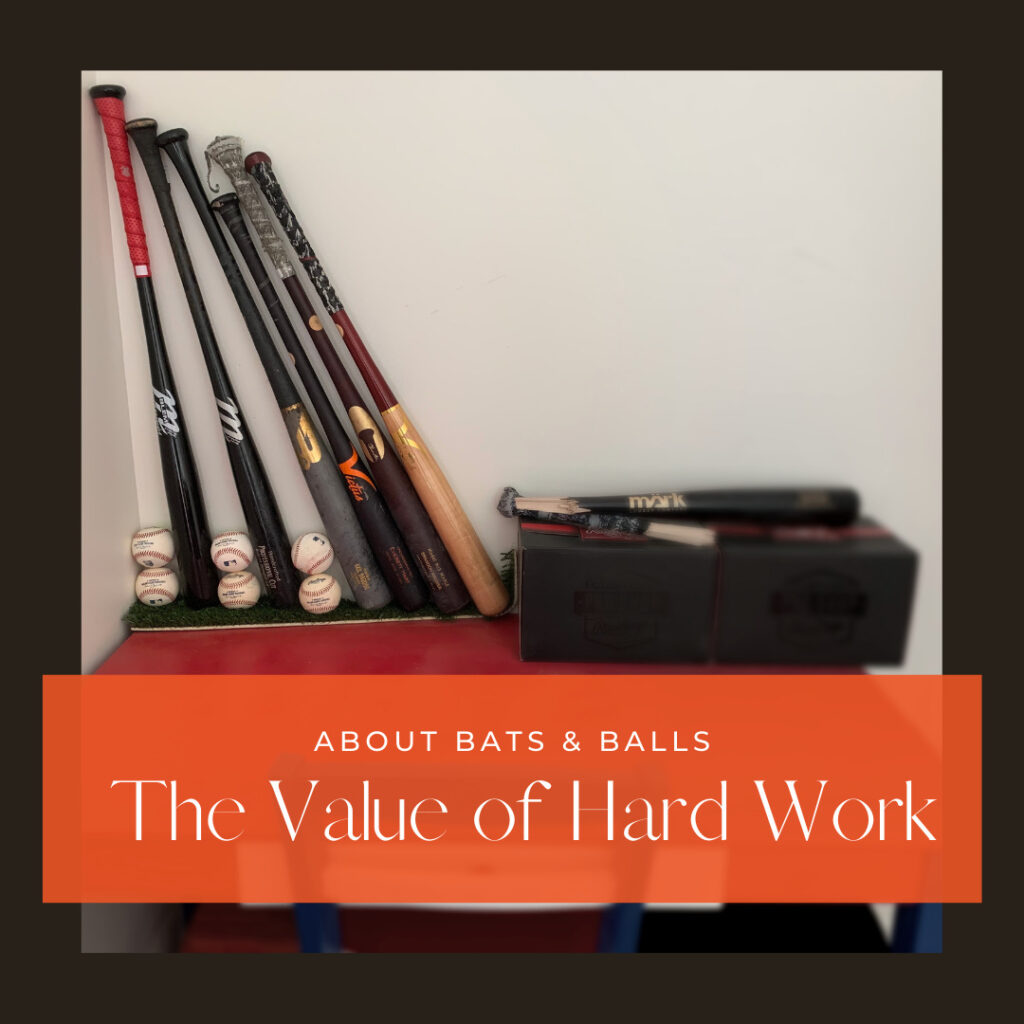 The Value of Hard Work

The Baseball Foundry opened its doors squarely during COVID.  The work required to launch a business is enormous under the best circumstances, but it’s bone crushing during a pandemic.  In terms of how the workload plays out day-to-day, no two people have borne witness to it more than my two kids.  In the earliest days of business ownership, the children of entrepreneurs rarely see the benefits of their parents’ hard work.  And by, “rarely see benefits” I mean kids take the brunt of long hours, parental lack of sleep, too much Chinese takeout, a lack of clean clothes, and many other things.  As a woman working to balance the responsibilities of motherhood and those of business ownership, I have quickly determined that I want my kids to actually build a life for themselves; there’s enormous value in the process and in watching an abstract idea become a very real, tangible thing.

If I’m completely honest, my children actually enjoy very little about this endeavor.  On some days, they are more than expressive of their discontent.  However, there is a short list of benefits, and sitting atop is the rotating door of MiLB and MLB athletes coming in to workout and take BP.  Seeing professionals in the next cage is certainly cool enough to turn most kids on their heels, but it still doesn’t replace dinner with mom or a clean pair of sliding shorts, ready for game day on Sunday.  My children will tell you that I’m gone too long, that I work too much.

Despite the long hours and lack of home-cooked meals, there are definite benefits for kids whose parents swim in the entrepreneurial acid bath.  My children are first-hand eyewitnesses to the importance of celebrating small victories, they see how naysayers exist even into adulthood, and they see value in a strong group of internal advisors.  My kids now appreciate the need for nimble yet logical thinking.  But, most importantly, they are learning one of life’s hardest lessons – nothing can ever replace hard work and preparation.  These durable examples, I hope, stick with my kids long into adulthood.  It seems, perhaps, that we are off to a good start because my kids see me working in tandem to our clients as we each pursue our distinct goals.

At 12, my son is keen on all the baseball gadgetry, but he’s got a love affair for bats.  In a time where baseball cleats cost a small fortune and custom ones are as flashy as a G Wagon, my kid loves bats.  In his eyes, the most beaten up bat is better than the best baseball glove.  He marvels at the science behind their creation, the colors and customization options, and, most importantly, their utter simplicity.  He loves the bat not because of its visual and spatial characteristics, though these are very cool things to behold, but because of what can happen when a player grabs a bat and it becomes an extension of the human form.

Never having parted with a single one of his, we have a collection of bats that span the last 7 years.  Each has its own story, too; one was his first home run, another a proud, first re-gripping he did himself.  One has dried blood and caked dirt on it from one of baseball’s many mishaps.  Among his favorites is his first broken Victus bat.  Known for their quality, Victus carves some kick ass timber.  He’s proud of the split maple wood, which, quite frankly, makes me cringe because of the price tag that comes with each splintering.

Shortly after new year, my son brought home a bat that he was all-too-proud to put in his broken bat graveyard.  Sitting near the sanctuary of his personal dead bats is one that hosts the broken lumber of the professionals.  He’s accumulated quite a stash of these graveyard bats.  One of those bats is his absolute favorite; it’s literally his most prized baseball possession.  Constructed of yellow birch in Canada, it’s emblazoned with a gold B45 at the halfway point.  The black and slate colored beast measures 33.5/31.  Riddled with scuff marks, gauges, and bearing remnants of pine tar from top to bottom, this bat has been to war, which is obvious from the break precisely at the point where the tapered neck splintered open to expose the raw interior wood.  After a few hundred swings, the timber could no longer maintain its integrity.  When science and baseball collide, physics will always win.  Always.  Indeed, even the most durable materials cannot withstand the repeated force of being smashed into a flying ball by the 6’1”, 210 lb. powerhouse that is Akil Baddoo.

After breaking onto the scene in what some call a fairytale story, I asked my son why Akil’s broken bat means so much more to him than the ball Akil signed, which currently sits in its pristine state, cased, atop a bedroom shelf.  In a deadpan reply, my son said, “because that bat represents everything it takes to make it as far as Akil has, and that ball represents what everyone wants from him now that he’s made it to the show.”  In the world of raising 12-year old boys, profound moments do not come often, but they will knock the wind out of you when they do.

In 2018, roughly 4.1 million kids aged 6-12 played youth baseball, and only 11%, or 455k kids will progress to high school ball.  The numbers dwindle even further when looking at the .2% or 9,800 that make it to play collegiate level ball.  To make it as far as Akil, you have to be among the most talented and elite players on earth.  With only 1,026 players making it on an MLB roster, your little slugger’s chances of making it to the bigs are an astounding .02%.

I see young players rotate through my doors everyday, each of whom seems to be on the personal quest to become the next Akil Baddoo.  The odds are stacked against youth ballplayers, but they don’t know that.  Part of me hopes youth players don’t awaken to these harsh realities, not just yet; before they worry about making it all the way, they should just focus on the task at hand – developing their skills and trying to have fun while they do.  What youth players should know – now – is that hard work is one of the many keys to success in baseball and in life.

Given the odds, my son’s comments have me thinking about the person that is all the rave in Detroit and across the MLB: by what measure are we determining greatness?  Baseball experts and enthusiasts alike will tell you that it’s some combination of statistics and performance, keeping a clean nose off the field, consistency, and fan appeal.

As someone who has a 12-year old boy marveling at Akil’s accomplishments and who talks about him incessantly, I can tell you that they all have it wrong.  The media, the experts, the pundits – all of them seem to have missed the real reason for Akil’s greatness.  Just ask my son who sat quietly and watched Akil from afar as he took hours of BP with his closest friends, many of whom are minor and major league players, too.  He will tell you that Akil had buddies helping him along the way, there to talk to him when he got frustrated after what must have been the 4,345 swing of the day.  My son will tell you that Akil worked harder than anyone he has ever seen in his short, 12-year life.  He will tell you that he never saw Akil give up, even when he was sweating and tired and hungry.  Akil just kept grinding it out, for the love of the game.  My son will also say that he heard sounds of laughter from lifelong childhood friends talking old stories and likely sharing new tales.  Most importantly, he will tell you that, after all he saw, Akil is a great athlete not because of what he does, but because of who he is, the people with whom he surrounds himself, and that he never seems to give up.

Wanting to see what my son prattled on about, I peeped in on Akil as he slammed balls; I saw perseverance, youth and wonderment, some frustration, and unbridled joy.  Akil loves the game, and it’s obvious; he embodies every young boy’s childhood dream as he walks up to the batter’s box in a little league game.  Akil is also extraordinarily polite and gracious.  But above all these traits, what stands out most to me is Akil’s work ethic.  It’s absolutely mind boggling.  In our world, we mistakenly see professional athletes as having “made it,” they’ve arrived.  But within that assumption we err, and quite significantly.  Professional athletes have only arrived upon a newer and more rigorous standard, one that is hard to achieve and even harder to maintain.

The whole idea of a fairytale story rubs me the wrong way, and my son thinks it’s bogus, too.  It comes off as half planned, as if Akil hasn’t worked for and and therefore doesn’t deserve every ounce of his accomplishment.  Look at the statistics.  Akil’s success is, quite certainly, a story of hard work, good friends, more hard work, and a personal goal of self improvement.

So, while scores of you are out there at ballgames dying to catch one of the bombs flying off of Akil’s newest bat, my son is quite content to be home with Akil’s broken bat, sitting atop his school desk, next to his own broken bats and tattered baseball books.  It serves as a constant reminder to my son that big stories don’t come easily, success must be earned, and it’s best done the old fashioned way – in the company of good friends as you make your way though a long, sweaty day at work.